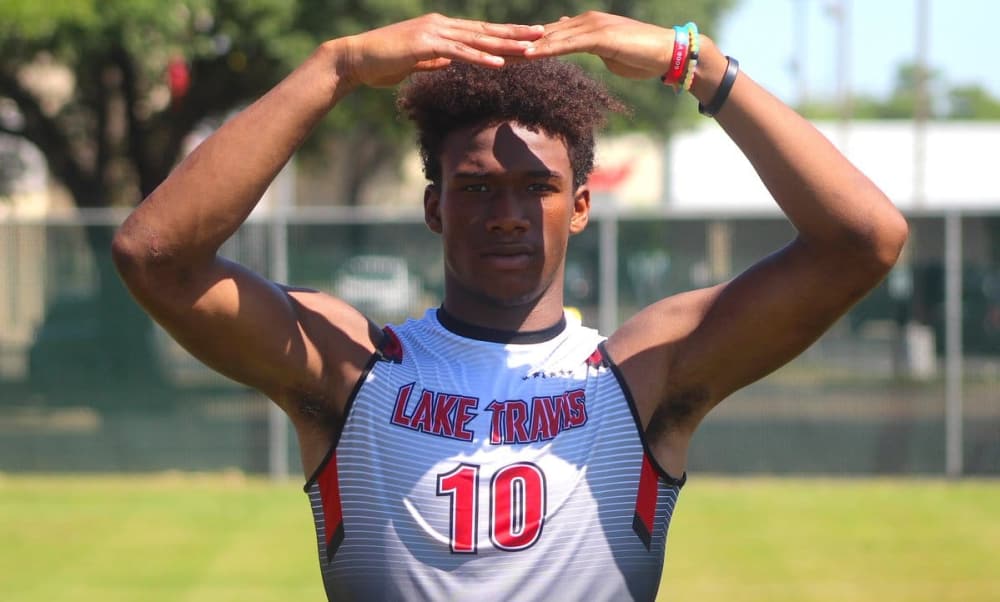 Garrett Wilson's commitment is Ohio State's most important in 2019 so far. (Photo via Twitter: EJ Holland/247Sports)

What are the biggest positions of need for this class?

With just about six months before Class of 2019 prospects can begin putting pen to paper to lock in their spots with college football teams across the country, there are still a lot more questions than answers with the current Ohio State recruiting class.

After a No. 2 finish nationally a year ago, the Buckeyes sit with just nine commitments and as the Big Ten’s second-best class behind Michigan (11 commitments) and just points ahead of Penn State (9), which has been absolutely on a roll in the last three weeks.

It’s now camp season in Columbus and things are sure to heat up. So you should expect a pretty active few weeks for Ohio State as they get a better grasp on how this class finishes out. It’s a class with a number of needs though, that’s for sure.

As I see it, here are the biggest areas of concern:

For a program that is so stocked with quality depth and talent, it seems a little weird to be able to pinpoint four must-fill positions in one recruiting class, but I can’t look at the roster and see it any other way.

At quarterback, there’s no dearth of talent, but if Dwayne Haskins is as good as people think he can be, it’s very possible that he could look at the NFL Draft after next season. If something like that happened, that means redshirt freshman Tate Martell and true freshman Matthew Baldwin – who is recovering from a torn ACL suffered last December – would be the extent of the depth chart. There’s a serious need for a tier-one quarterback in 2019. As we talked about earlier on Tuesday, that’s suddenly becoming a bigger challenge than anyone expected.

The wide receiver group is going to take a major hit following the 2018 season. Johnnie Dixon, Parris Campbell and Terry McLaurin will all be moving on and you should expect KJ Hill to do the same, despite having another year of eligibility left. Austin Mack, C.J. Saunders and Binjimen Victor should all return. But behind that trio there’s only Jaylen Harris and a group of talented but unproven freshmen in Kamryn Babb (also recovering from a torn ACL), Jaelen Gill (who has primarily played running back in his career), Blue Smith (who I still think could end up at tight end) and Chris Olave, who has played the least amount of football of any of them. There is a need for three to four wideouts in 2019, and though that need has been mitigated a bit by the colossal commitment of Garrett Wilson, it’s imperative that Zach Smith and Zone 6 lock in a couple more of their top targets in this class.

In the trenches, the Buckeyes will lose Isaiah Prince, Demetrius Knox, Brady Taylor and Malcolm Pridgeon for sure. Branden Bowen will have completed his fourth season and Michael Jordan is a potential NFL-early entrant. They’ve landed Doug Nester and Ryan Jacoby already, but there’s a glaring need for true tackles on the roster. That makes players like 5-star prospect Darnell Wright and 4-star Illinois product Trevor Keegan very important moving forward. Ohio State needs talent and depth on the offensive line and should look to sign five guys there this year.

Finally, there’s the defensive end position. In 2016, Ohio State signed a pair of 5-star prospects (Jonathon Cooper and Nick Bosa) and they signed another (Chase Young) in the Class of 2017. But Bosa will be gone following this coming season leaving just Cooper and Young alongside a trio of 2018 freshmen – Tyreke Smith, Alex Williams and Tyler Friday – and there’s no guarantee any of those three will stay at defensive end. The Buckeyes have a commitment already from Mentor, Ohio’s Noah Potter, but there’s no player in the country that is more of a “must get” than Olentangy (Ohio) Orange High School’s Zach Harrison. He’s a 5-star, freak of a talent from outside of Columbus and plays a position of absolute need.

Class Warfare: Who are the Buckeyes top targets for quarterback in 2019?
Stay ‘Crootin: Jake Wray hoping to lead the way in Class of 2020
Advertisement