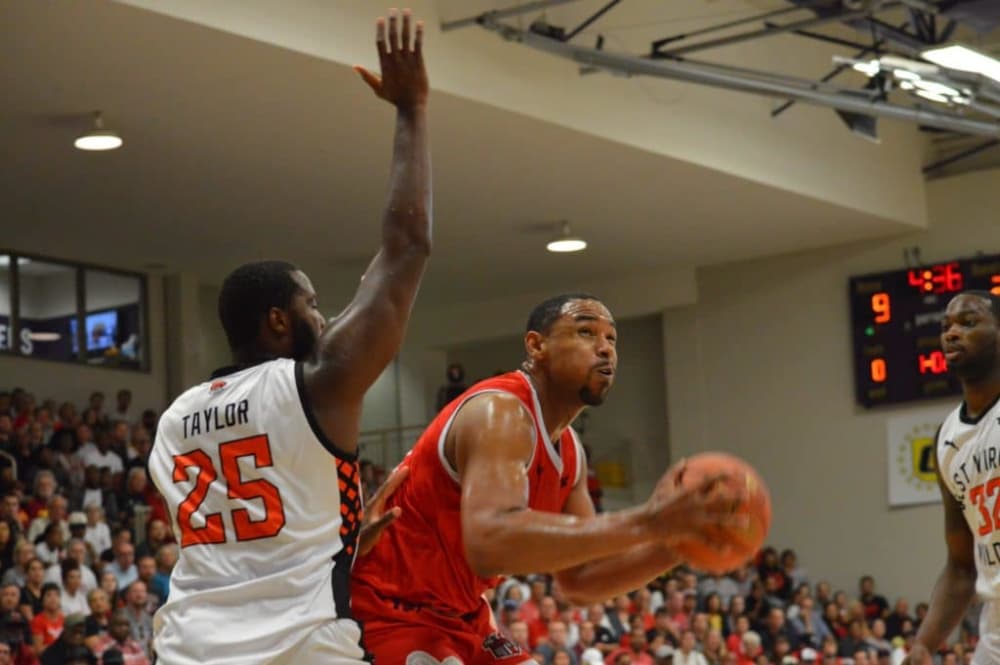 Seriously, if the organizers are going to put on an event that’s this much fun, it should at least make sure as many people as possible can pack the building.

Where else can Ohio State fans go to see Aaron Craft again running the show and frustrating opponents with his relentless defense? Another shot to see Jared Sullinger dominating on the glass and knocking down jumpers? Jon Diebler raining 3-pointers from all over the court? What about B.J. Mullins inexplicably pulling up from 30 feet and banking in a bomb or throwing down absolutely vicious alley-oop dunks?

The beauty of this tournament is that it capitalizes on nostalgia, but not at the expense of competitive basketball. And make no mistake, the Scarlet and Gray roster comprised (mostly) of former Buckeyes is a dynamic squad, one that deserved that No. 1 seed in the TBT Midwest Region and the chance to play at “home” at Capital Center on Saturday.

For the record, Scarlet and Gray wound up blitzing West Virginia 99-68 in the first-round matchup. And it set up a tantalizing knockout game with the Matadors from Texas Tech on Sunday at 2 p.m.

Based on the opening day, odds are that is going to be another tough ticket.

“That felt great, man,” Sullinger said finishing with a game-high 20 points. “Honestly it felt like a home game. It’s been a minute since I got to play in front of the scarlet and gray, and it was great. We had a lot of fun. 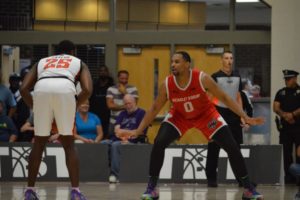 Jared Sullinger and his Scarlet and Gray teammates played in front of a sold-out crowd in the TBT. (Nick Clarkson/Lettermen Row)

“When we were running out, I kind of got chills because we were playing in the home town again. You see all the scarlet and gray, you see the student section, you don’t get that [as a professional]. You don’t get a student section going crazy. Our fans, they’re crazy and we love it.”

That passion could potentially fill a larger venue, obviously. And that’s not a slight to Capital, with its lovely purple seats and the handful of championship banners hanging over midcourt.

Look, there’s nothing wrong with the gym at Capital. It’s a nice court, everybody in the sold-out crowd had a great view and there was even a lovely suite with room for Thad Matta to stretch out and watch his old players in action.

And, sure, maybe it would be a risk to play more early-round games in a larger venues around the country. But if this entertaining event is going to become a fixture in Columbus and the Ohio State alumni remain committed to putting together a team with enough talent to win the $2 million prize, it might want to consider staging those games in a place where the Nuthouse isn’t crammed into a corner.

“The buzz was electric,” Scarlet and Gray coach Scoonie Penn said. “A lot of people wanted to come watch and be a part of it. We had [former Buckeyes] from every generation here … that just shows you the bond we have within our program, and I think it’s just going to grow and continue to get stronger.

“That stuff is special, and I think today’s crowd showed that to the fullest.”

Again, it probably could have done even more with a few extra seats. But at this point, it probably sounds like too much complaining.

It really is just a suggestion, though, because just about everything about TBT is a blast.

There is motivational incentive for the players to perform at a high level. For hoops fans, it’s definitely enjoyable to see some what-if fantasies about the potential Ohio State might have had if not for NBA defections as a generation of guys take the floor together. And for ESPN, how could it possibly complain about this content in late July before the interminable football offseason ends?

TBT really does deliver a great event. Just imagine what the Scarlet and Gray could do in the future to help take it to an even bigger stage.