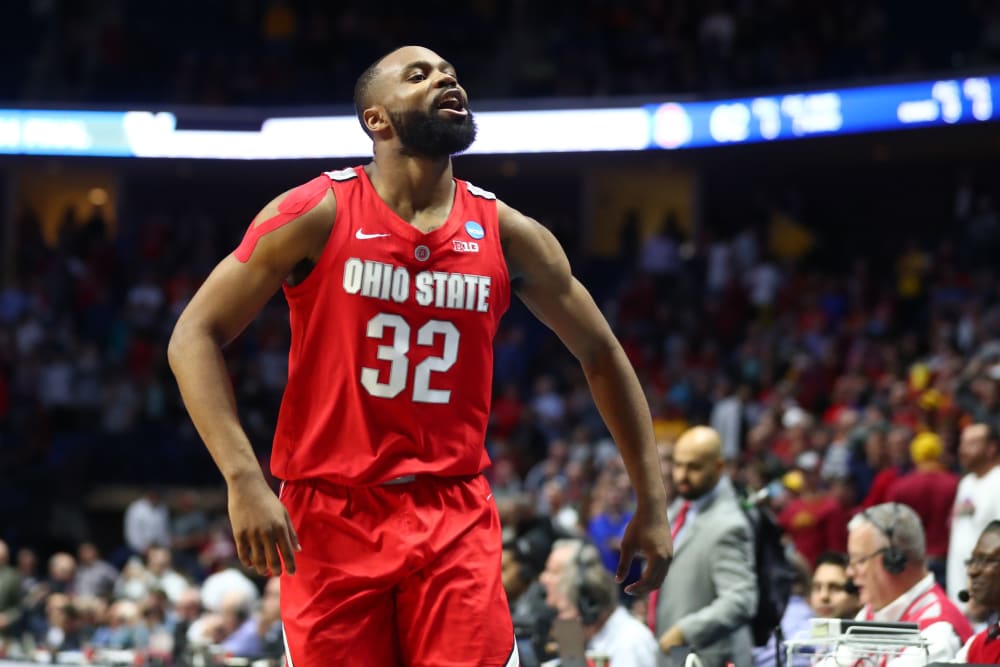 Ohio State guard Keyshawn Woods and the Buckeyes are storming to the Second Round. (Mark J. Rebilas/USA TODAY Sports)

Like always, he was aware of just how many people had picked against the Buckeyes. Truthfully, the reasons were justified since they were underdogs as a No. 11 seed who had struggled down the stretch just to get in the NCAA Tournament and clearly don’t have the deepest roster in the field.

Holtmann pointed all of that out while also acknowledging just how good No. 6 Iowa State had been recently. And combining that with the satisfaction that came from the 62-59 win at the BOK Center on Friday night could easily have produced more cheeky comments from a coach who isn’t afraid to point it out when skeptics of the Buckeyes are proven wrong.

“But I really do feel like we played well in the last week and a half, but given the fact that we had a tough January and then we had some bumps in the road in February and March, that just makes it so sweet. … I promised myself I wouldn’t [call anybody out], and when I got interviewed after the game, I was so close. I was so close, and I was going to call out one individual in particular. I had a couple coaching buddies who wished me good luck, and they said at the end of it: ‘Whatever you do, do not repeat your postgame performance after the South Dakota State game last year.’ So, I said I wouldn’t do that.”

Instead, Holtmann heaped praise on the Buckeyes, gave credit to the Cyclones for a great season and turned his attention to an even bigger challenge against No. 3 seed Houston on Sunday. Can Ohio State pull off another shocker? Here’s what Lettermen Row learned about how the Buckeyes managed it against Iowa State and what it will take against the Cougars after they practiced for the matchup on Saturday in Oklahoma. 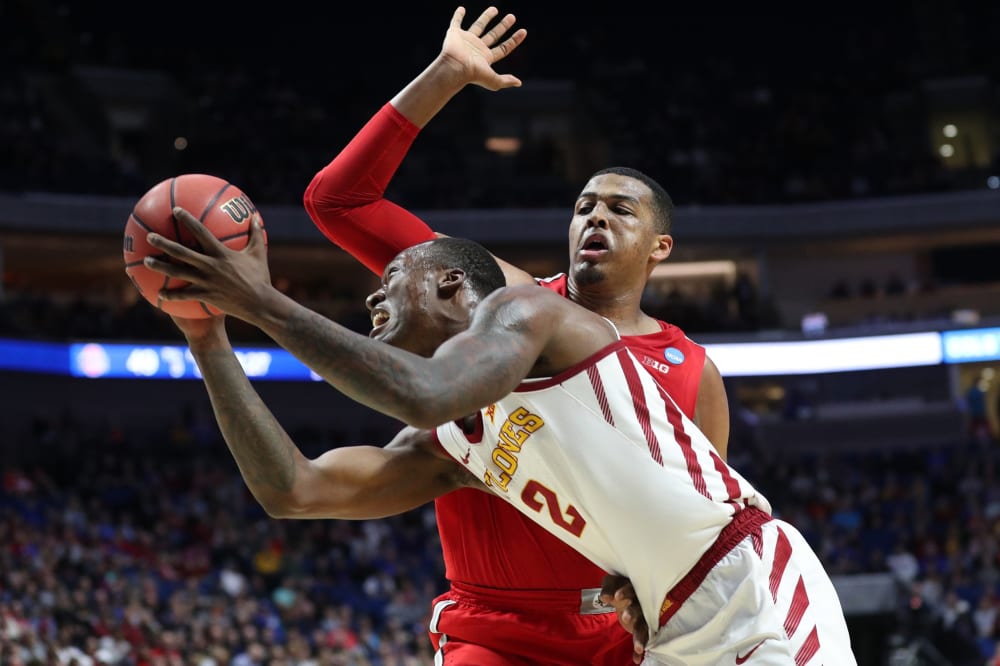 Ohio State sophomore Kaleb Wesson was a factor on both ends of the floor for the Buckeyes. (Brett Rojo/USA TODAY Sports)

The offense comes and goes for Ohio State, and once again it vanished during a key stretch late in the game. But the defense never relaxed really at any point against one of the most potent attacks in the country, and Iowa State had to grind for virtually everything it got against the Buckeyes — which had Holtmann gushing about the effort when it was over. In terms of complete effort on that end of the floor, the way it frustrated Iowa State into wasted possessions, bad shots and costly turnovers will go down as the finest outing of the season. Unless, of course, Ohio State can duplicate it against athletic, aggressive Houston in the Second Round.

“We knew we had to get stops,” guard Keyshawn Woods said. “That’s what we pride ourselves on: Defense. And with regard to scoring, we know our defense travels with us, and that was the most important thing. That was the last three minutes making sure we were locked in and getting as many stops as possible to win the game.”

Houston has some size and length, but it will be put to the test in the post against the strength of Kaleb Wesson. The sophomore has returned from his late-season suspension clearly intent on making up for his absence, and he was far too much for Iowa State to handle on the inside Friday night. The Buckeyes need to play more of a methodical, half-court game to cover up for some of their weaknesses, and funneling the attack through Wesson on every trip down the floor should be mandatory. When Ohio State gets 31 minutes out of him, it can expect more performances like the 21-point, 12-rebound production on display in a brutally physical matchup that allowed him to thrive against Iowa State.

“I imposed myself because of my preparation,” Wesson said. “You know, my coaches and my teammates, they prepare me every day in practice, push me to finish shots that sometimes it’s hard to finish, you know. And when you have that, it just makes for easy basketball.” 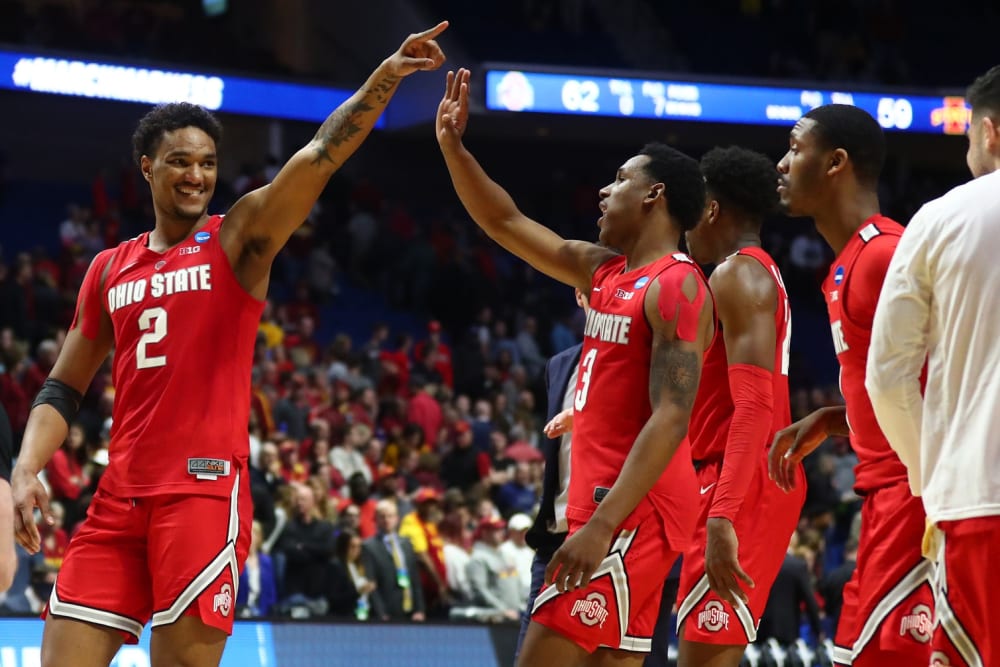 Ohio State was sparked by Musa Jallow in the first round win for the Buckeyes. (Mark J. Rebilas/USA TODAY Sports)

Musa Jallow didn’t want to rank his best games for Ohio State, but there’s really no need. The way he rose to the occasion on offense, the energy he played with on defense and the way he atoned for a couple mistakes with extra effort left little doubt that it was his finest work with the Buckeyes. Jallow had only scored in double figures three times this season before hitting all five of his shots on the way to 11 huge points against Iowa State. He hadn’t had a game with multiple steals in two months before swiping three on Friday. And while this kind of work was expected for him heading into his sophomore season, it’s still important to remember that he’s young and developing after reclassifying to join the Buckeyes a year early.

“Musa just works hard every day,” guard C.J. Jackson said. “How he played today is how he practices, so there’s no coincidence that it’s going to translate to the game. … He had an up and down year, but I think many people forget that he’s really supposed to be a freshman this year. He’s one of the youngest guys on the team, but he hasn’t let that affect him. He just came in and gave us a huge boost defensively, knocked down a couple shots and played big.”

The search for a consistent offensive complement for Kaleb Wesson took all season, but Ohio State clearly has a leader in that area now. For all the struggles during his only season with the program, the Buckeyes probably won’t even remember them when they look back at this year thanks to the incredible work Keyshawn Woods has done in the postseason. Ohio State probably wouldn’t have knocked off Indiana to get in the field without him in the Big Ten Tournament, and he backed that production in Chicago up with a gutsy 19-point outing to help fuel the attack against Iowa State. Having Wesson back on the floor is obviously huge, but that alone doesn’t make the Buckeyes a threat unless there is somebody capable of hitting jumpers to take a bit of pressure off the big man.

“Since I was a little kid, that’s the dream that everybody has,” Woods said after putting the win away down the stretch. “Everybody thinks about wanting to ice the game, having it on your back, be the man to step up and do it.”