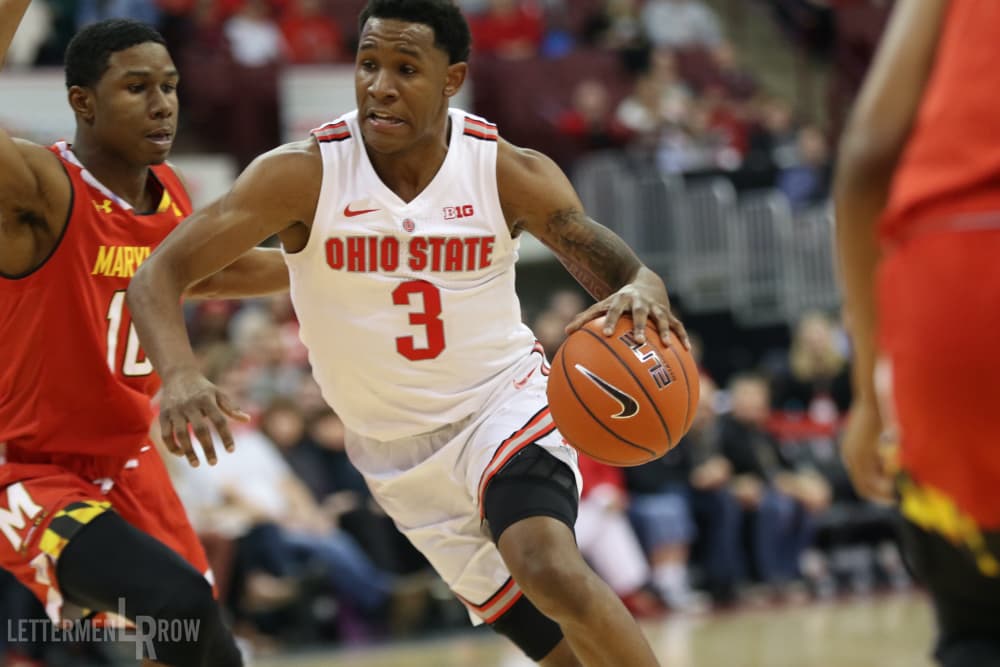 Ohio State guard C.J. Jackson is expected back for the Buckeyes on Tuesday. (Birm/Lettermen Row)

The speculation, debate and conversations about Ohio State never end, and Lettermen Row is always ready to dive into the discussions. All week long, senior writer Austin Ward will field topics about the Buckeyes submitted by readers and break down anything that’s on the minds of the Best Damn Fans in the Land. Have a question that needs to be tackled, like the one today about the health of C.J. Jackson? Send it in right here — and check back daily for the answers.

Why is he in the game? With or without an injury.

Whether it’s cramp issue that seems to pop up at the most inopportune times, an ankle injury or now a shoulder problem, C.J. Jackson always seems to be battling something.

But the Ohio State guard is expected back on the floor on Tuesday night in a critical matchup against No. 22 Iowa with potentially major NCAA Tournament implications after missing Saturday’s loss at Maryland. And there is no question that the Buckeyes need him there and not on the bench.

Jackson is clearly not a true point guard. He sometimes makes baffling decisions with the basketball. And there were even stretches last weekend where the Buckeyes looked like they could survive without him if the health problems lingered.

But Jackson is one of the few big-shot takers and makers on the Ohio State roster, he’s a veteran presence and he’s a lockdown defender on the perimeter. So, if there are inconsistencies in his game, the Buckeyes are still likely to be much better off riding some of the waves with him rather than trying to make this final late-season push to the Big Dance without him.

“C.J. was able to practice, so unless he’s feeling something different today in practice, we would expect him to play,” Ohio State coach Holtmann said. “I think the only difficult thing with it is if we could have prepared a little bit more. We just didn’t know until we were in practice on [Friday] before the game that he was struggling. If you have a little more time to prepare, it does help you as a coach and you feel like you can maybe try to put guys in position better.

“But I honestly don’t think it really impacted our team significantly, and it typically doesn’t for maybe a game or two. We certainly would have loved to have him, and I think where it did hurt us the other day was when C.J. is playing well, he gives us another really solid perimeter defender and he also gives us a guy who can make shots. I think we did probably miss those two things.”

The short-term problem for the Buckeyes is that there just aren’t many other options to replace what Jackson brings for a relatively limited roster in Holtmann’s transitional season rebuilding the program.

Ohio State can get big 3-pointers from freshman Justin Ahrens, and he’ll surely play a role down the stretch. Keyshawn Woods can pick up some of the ball-handling, but he’s had his own turnover problems. Duane Washington is an option to provide more production on both ends of the floor, but that’s another freshman where the Buckeyes might want to be careful not to overextend him.

For all of the ups and downs with Jackson, he’s the only other scorer averaging in double figures alongside Kaleb Wesson. He leads the team in steals and assists, he’s grabbing more than four rebounds per game and he never complains about either his health or his role.

C.J. Jackson is going to be crucially important to the Buckeyes as they try to pick up the win or two that should earn them an invitation to the NCAA Tournament. And the program needs him healthy and on the floor.