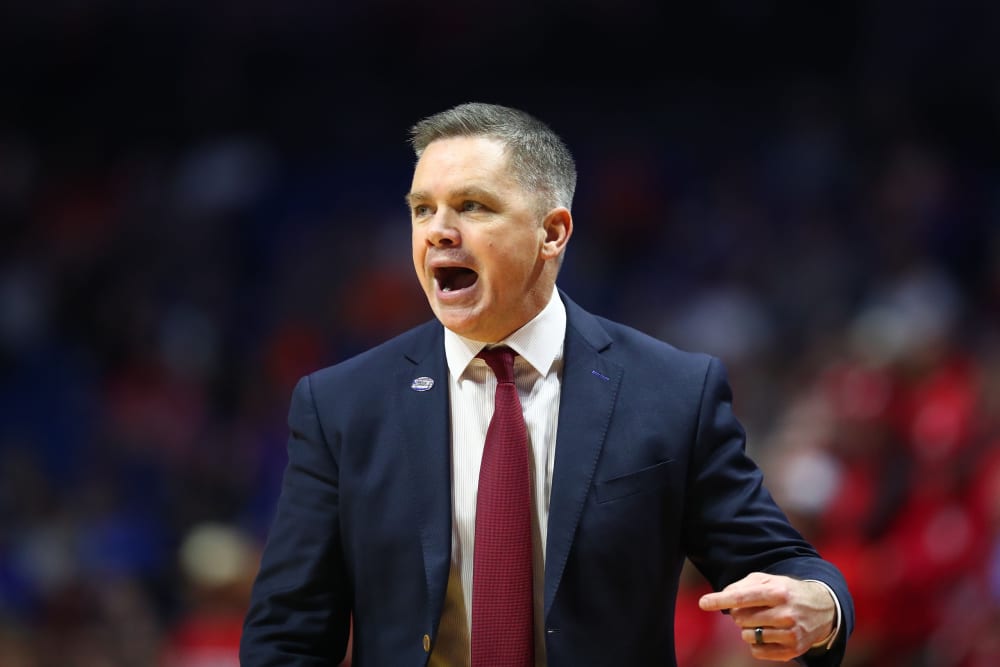 Now it’s time to get to work on the ceiling.

There was nobody in a somber locker room on Sunday night at the BOK Center that didn’t feel the sting of the 74-59 second-round loss to No. 3 seed Houston, and the Buckeyes weren’t ready to look for silver linings or talk about the future yet. That’s also exactly the kind of mindset Holtmann wanted from his team, even though there will be a time at some point to toast the unexpected accomplishments of his second season in charge while also raising the bar for his third.

Make no mistake: What the Buckeyes did this season was an unequivocal success. But there’s also no doubt that moving forward the program is going to have bigger goals than just winning once in the Big Dance.

“To get here as quick as possible, that really was the goal,” Holtmann said in a quiet hallway at the BOK Center. “How quickly could we get our group tasting March Madness? We’re got talented kids and talented players, and I didn’t know when all that would happen given all the changes that came upon us there when we took over the program. Now, I didn’t know and I’m not going to sit here and say that I expected this in the first two years. Two wins? No.

“It was get here, and get here with the process that we believe is the right way. … There is a process to this.” 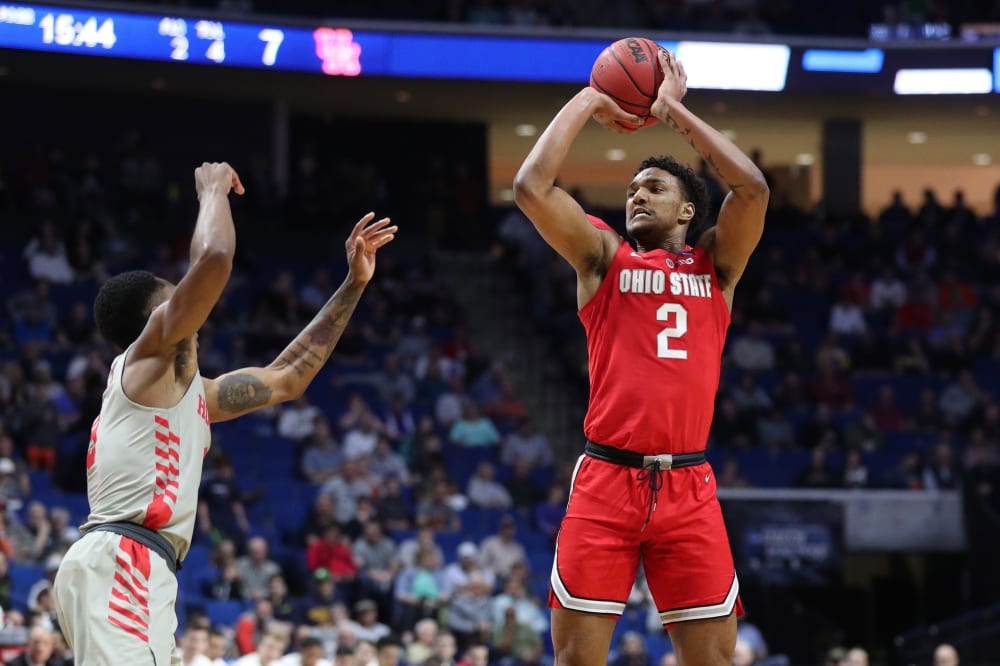 Clearly it’s working for the Buckeyes, and there is even more reason to believe that Holtmann has the blueprint that can take the program into the second weekend of the NCAA Tournament and maybe beyond that soon. He’s already ahead of schedule thanks to the two appearances in the Big Dance, two first-round wins and a recruiting class on the way that ranks among the nation’s best.

After two years of getting to go to work with an underdog mentality and using that to fuel a long list of accomplishments that almost nobody could have reasonably anticipated, the next phase of the process is going to be dealing with higher expectations. Certainly getting to March Madness is an achievement all by itself, and any win should be cherished once a team gets there. But with Holtmann and Ohio State having already proven it can do that given all the roster limitations, injury problems, suspension issues and adversity it has faced over the last two years, the bar must now be raised once he starts to get everything he needs on hand.

“How does this fuel us moving forward? What do we see in our guys?” Holtmann said. ” If you said to me, why are we sitting here today, I would say it’s because of the guys who were sitting in last year’s locker room after Gonzaga. The improvement they made, the character they showed — and our freshmen were tremendous — but I think if we’re going to continue to move forward, it’s going to be because those guys in that locker room [feel] that this stings. This stings in a really real way.

“Listen, it’s no guarantee. There is no guarantee to be here. But as we go through this together, I’m incredibly appreciative of this team, this year and last year and last year’s team. I want to strive so hard to continue to move this forward. I know how hard that is. I know how hard it is to get here, to win a game, to move two games and to move forward. And I don’t want to get ahead of ourselves, because there are no guarantees.”

Any number of hurdles could pop up to derail the plans for the Buckeyes moving forward, as this year’s squad can surely attest. But if there is a sure thing at this point, Holtmann certainly feels like it given the impressive turnaround he engineered in his first season, the remarkable ability to squeeze every last ounce of potential out of his second team and the tight-knit culture that is impossible to ignore. 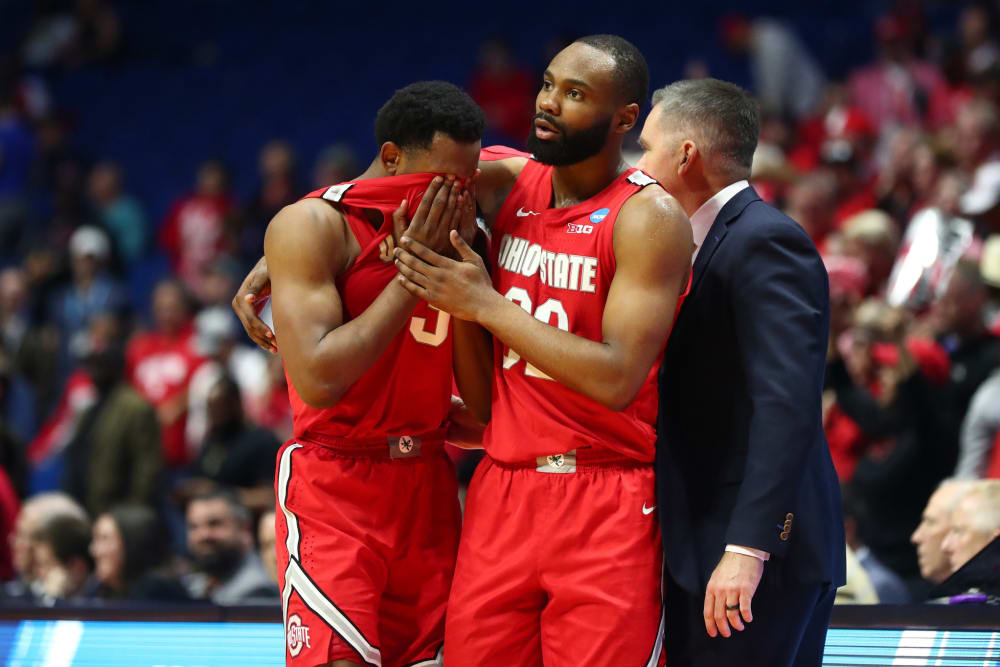 The second-round loss to Houston stung Ohio State even though it had a successful season. (Mark J. Rebilas/USA TODAY Sports)

The Buckeyes are on the upswing. Next year they’ll have two true point guards on the roster, the freshmen who were thrust into prominent roles will now have two NCAA Tournament games under their belts and veterans Kaleb and Andre Wesson will be in a position to take the reins as leaders while expanding their own games. That doesn’t ensure that Ohio State is automatically going to blossom into a national-title contender, and there is a lot of work ahead of the program. But the baseline expectation for the Buckeyes is going to change moving forward, and just getting back to the Dance is now longer going to be considered a success story on its own.

“Right now, we’re just trying to be with our team and congratulate our seniors for a hell of a run,” Ohio State freshman Duane Washington said. “There are a lot of emotions for everybody in here — and there are a bunch of competitors who don’t like to lose.

Those skeptics are about to disappear, and they’ll be replaced with preseason projections that include Ohio State as a Big Ten contender, hype about the touted newcomers on the way and more pressure on guys like Washington, Luther Muhammad and Kyle Young to take the next step. 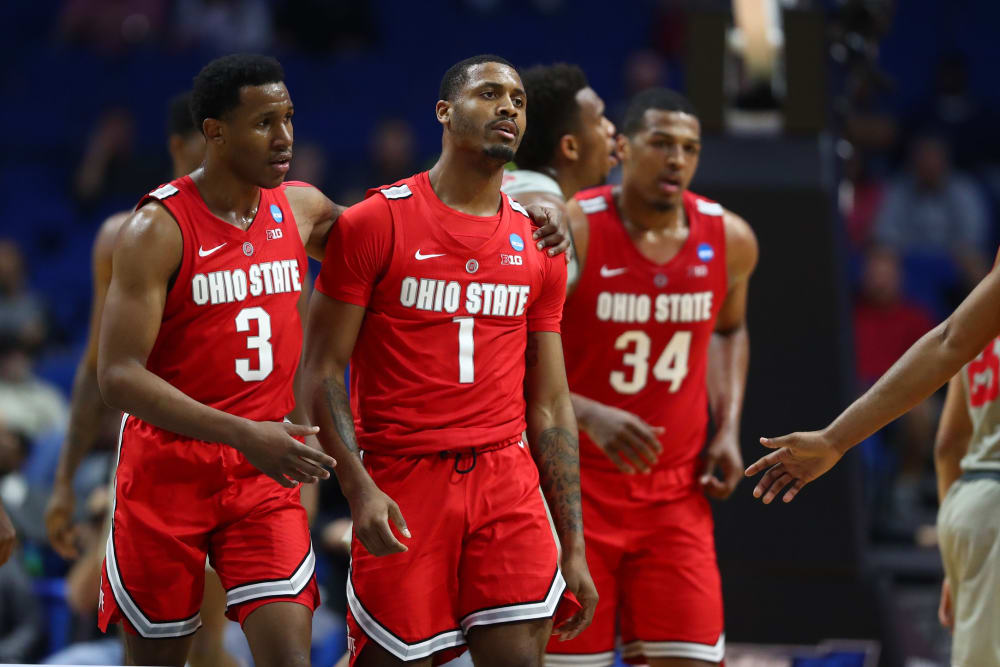 Ohio State guard Luther Muhammad will be a key part of the future for the Buckeyes. (Mark J. Rebilas/USA TODAY Sports)

That will all be new for Holtmann and Ohio State. But that’s what they’ve been working toward that all along, and now it’s time for bigger goals.

“Listen, I’m really proud of our group,” Holtmann said. “I’m incredibly proud of this team, maybe as much as any team I’ve coached, to be honest with you. I’ve really enjoyed coaching them, we’ve had our rough days, but to be one of the final 32 teams standing and I thought we competed [Sunday] really well, we just couldn’t quite get it to where we needed to.

“… But the importance is building your team and your program where getting here is a consistent goal, and then advancing is a consistent goal. That’s the challenge ahead of us. And I do think that being in this locker room and tasting victory and defeat can only help us moving forward.”

Getting a chance to do both was the ceiling for this version of the Buckeyes, and there’s nothing wrong with that.

But the foundation is in place now for something grander, and now Holtmann can get to work on adding another floor.