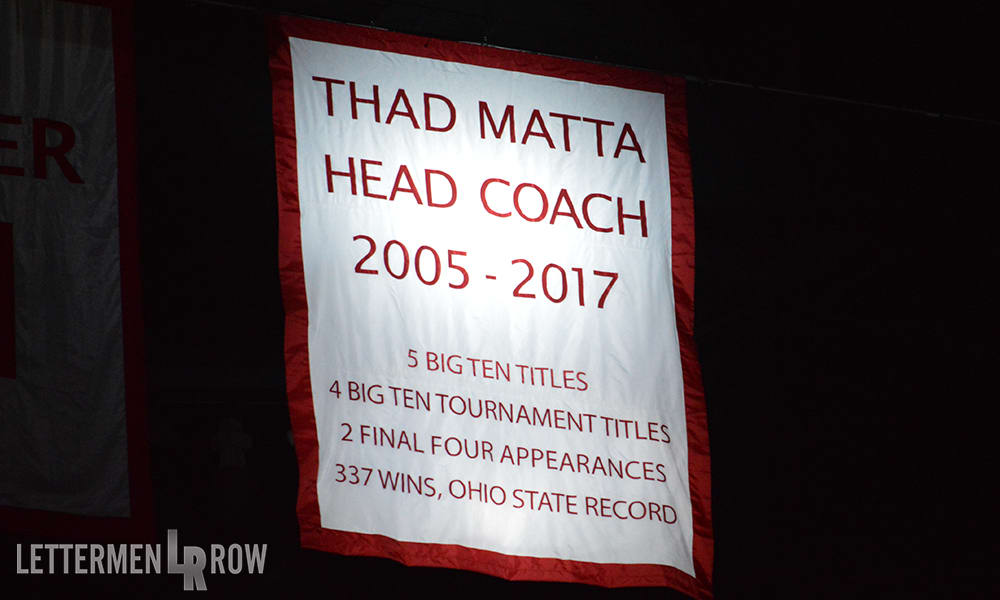 Thad Matta will forever be hanging around the Schottenstein Center with this new banner. (Nick Clarkson/Lettermen Row)

Everywhere. Each coaching stop. Hinkle Fieldhouse, where Matta had starred first as a player for the Butler Bulldogs before he began the program’s coach their current reemergence into semi-permanent national commodity.

Too, in Cincinnati when he quickly flipped basketball-proud Xavier back around.

Finally, yes, he studied those immortalized in both Ohio State’s basketball homes — St. John Arena and the Schottenstein Center.

On Wednesday night, in a move Matta indicated he did not know was planned to unfold, he glanced to the rafters and saw his own name and accomplishments immortalized by the Ohio State family.

“I’m a little bit in awe. What’s funny is that I had no idea what was going on. I told Gene [Smith] out there, and this is maybe an odd thing for me, any gym or arena I’ve ever been in, I’d always study who was up in the rafters,” Matta told reporters during halftime. “To have that honor [Wednesday] … I’m really at a loss for words.”

Would Matta have postponed the request to attend, had he known in advance a banner awaited with his name and superlatives? Matta closed his 13-year run atop the program with nine total Big Ten championships, two Final Fours and a school-record 337 victories.

“No, I don’t know,” he joked. “ … I think from the standpoint, like I said, I’m glad that I didn’t know. I thought they were going to give me a rocking chair or something like that, golf balls. I think back to all the people I’ve seen, to do it at a place where I didn’t go to school, it quite honestly means the world to me.

“I’ll be honest with you, usually they do this when a guy is dead, and at least I get to see it. So I was excited from that standpoint. I think the transition has been so smooth [to Chris Holtmann]. What he’s done in that regard is second to none. Everything he’s doing, I could not be happier.”

Matta, who did not rule out an eventual return to coaching and who last offseason spurned Georgia’s offer before the Bulldogs hired fellow Big Ten alum Tom Crean, emphasized his comfort with his departure from Ohio State and close friend, Gene Smith. 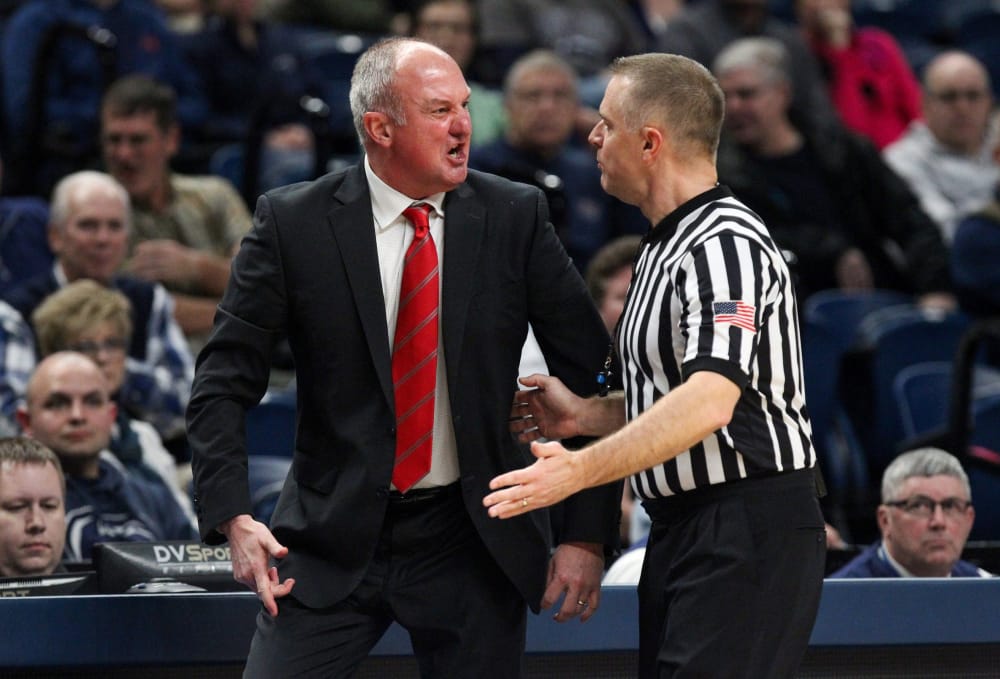 Thad Matta is able to relax a bit more now than the former Ohio State coach could on the sideline. (Matthew OHaren/USA TODAY Sports)

“I am as completely at peace,” Matta said. “It’s funny, and I always said this when I worked here, I don’t know what they do to the students and fans when they’re here but they inject something in them.

“I found myself rooting so hard last Saturday for Ohio State in the Michigan game. We don’t miss (football) games. … We had a great run here.”

Most recently, Matta has had a more relaxing and yet introspective look at college basketball’s current landscape. He joked about a tough Butler loss last week at the Battle for Atlantis in which he returned to his hotel room and quickly fell asleep.

Matta also got to experience another first: Tailgating for Butler’s basketball opener.

“I went to Butler’s home opener, Saturday game. College buddies said, ‘Let’s meet and watch football and then go to the game,’” he said. “I said, ‘You know, the game’s in five hours. Is that what you were doing all those times?’ And they said, ‘Yeah, before and after.’”

Buckeyes senior guard C.J. Jackson called Matta’s return to be honored “surreal,” though like his current head coach he missed the ceremony during halftime.

“I saw Thad before the game, had a chance to go up and spend a little time, a couple minutes,” said Holtmann, the genesis for the move to honor Matta this season. “Hope it was a great night for him. He and his family are deserving, and it sounded like he got a great ovation.

“It was good to spend a few minutes with him.”

And now his name will forever be hanging above him and the Buckeyes at home.