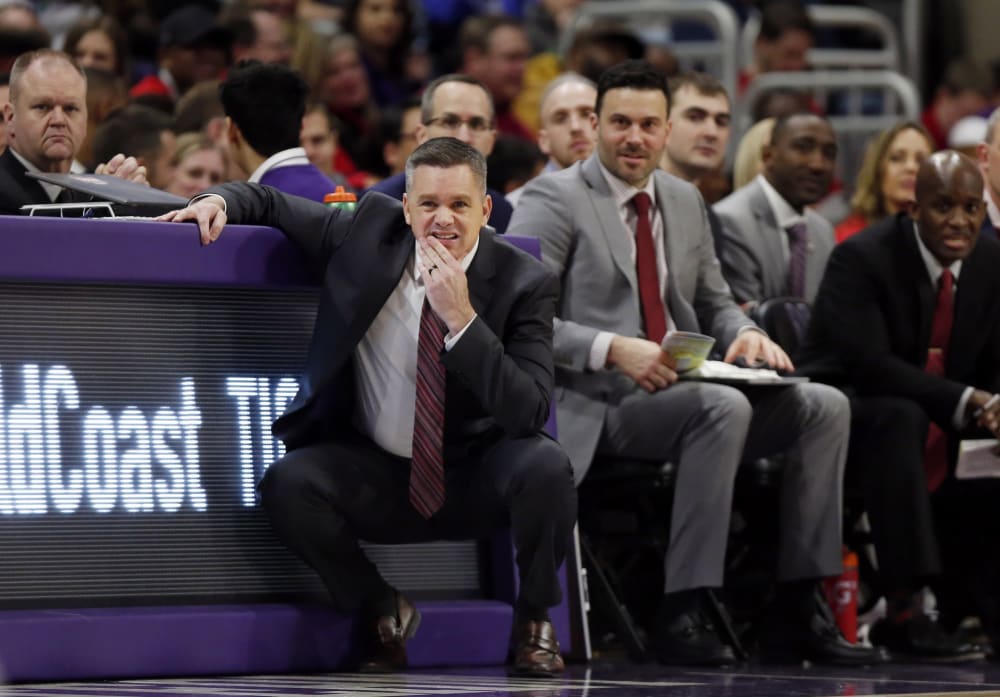 Ohio State basketball appears to be firmly on the bubble heading into Selection Sunday — just a slightly more forgiving one.

With the selection committee set to reveal its bracket, the question regarding Ohio State appears to be not whether the Buckeyes are in or out of the NCAA Tournament field but instead whether the Buckeyes will have to play in Dayton before heading to the traditional first round. Ohio State coach Chris Holtmann believes his team is safely in the field, but like everyone else the Buckeyes are monitoring the likelihood of being put in a play-in game that would alter how they prepared for this week.

“You’re always excited and anxious for Sunday and what that show is going to be,” Holtmann said. “But like I’ve said, I feel good about our body of work.

Most outlets that produced updated bracketology projections immediately after Saturday’s games concluded put the Buckeyes on thin ice, predicting that they’d avoid Dayton but listing them either third or fourth in the “final four byes” category. The good news for Ohio State is that there will be no unexpected bid thieves added to the field on Sunday. Every conference title game on Sunday features either two teams that would earn an at-large bid either way or no teams that would earn an at-large bid either way. That means there won’t be a way for any of those conferences to steal another spot by having a team that would otherwise be out get the automatic bid by beating a team that would be in no matter what.

Here’s how a few outlets viewed the Buckeyes heading into Selection Sunday.

Bubble Watch: At best, Ohio State ended its conference tournament run at a time when the committee was listing it as one of the last four byes in the field. At worst, the Buckeyes were something closer to the last team in the field, period. You’re not on the committee and neither is Bubble Watch, so we don’t know where in that range OSU was located when the team lost 77-70 to Michigan State in the Big Ten tournament quarterfinals. If the former is closer to correct, Ohio State has a good shot at staying in the field of 68. If, on the other hand, the latter scenario is closer to the truth, then Chris Holtmann’s team is in trouble.

Bubble Watch: Thursday’s win over Indiana was extremely crucial. Friday’s loss to Michigan State was extremely unsurprising. The Spartans pulled away in the second half en route to a 77-70 win, and the question now is whether the Buckeyes managed to do enough before they took the court against the Big Ten’s No. 1 seed. Our view: probably.

The Buckeyes did much of their best Quadrant 1 work on the road (Cincinnati, Nebraska, Creighton, Indiana), a trait the selection committee has traditionally valued (and cited in post-bracket explanations). That, and Thursday’s dispatch of the Hoosiers, may be the two most important discrete factors that send Ohio State through.

Bubble Watch: Ohio State will remain in the Bubble Watch until the bracket is released on Sunday, but the Buckeyes are likely safe. Their regular season includes wins over Cincinnati, Iowa, Minnesota, Indiana and Creighton, and they have just one loss outside the top two quadrants. They won’t be a high seed, but they should get an at-large bid.

That’s the million-dollar question, obviously. At this point, it seems like the Buckeyes have had enough things go their way to avoid being sent to a play-in game. It’s essentially a coin flip, though, since most everyone believes the Buckeyes would be a No. 11 seed and two of the four regions will have a play-in game featuring No. 11 seeds.

Holtmann said the staff was planning to monitor the conference tournaments over the weekend to assess how likely it was that they’d need to prepare for a trip to Dayton.

“We’ll put some thought into that as a staff,” Holtmann said. “We’ll try to monitor some of that. How much do you really know for sure? But we’ll try to monitor it a bit and see what happens with some of these other league tournaments. If it looks like it could, we might adapt and change.”

Speaking of the short trip to Dayton, don’t expect Ohio State’s location to serve as some sort of tiebreaker that pushes the Buckeyes into the First Four. The event has never had trouble selling tickets regardless of where the teams are from, and the NCAA Tournament, which produced more than $1 billion in revenue in 2018, isn’t exactly a penny-pinching enterprise that would assign a team somewhere to save on travel costs. Furthermore, using proximity to include a team that deserved better puts the opponent at a talent and support disadvantage. So put down the pitchforks (for now), because Ohio State isn’t going to be sent to Dayton for any reason other than the committee thinks that’s where it belongs.

Ultimately, though, the final call here is that the Buckeyes squeak their way into the traditional first round. It’s always worth noting that the committee seems determined each season to shaft mid-major teams, a bizarre practice that nevertheless works in Ohio State’s favor. Ultimately, that combined with the early season road wins and victories over other bubble teams like Creighton and Indiana should get the job done despite some big-time bumps in the road this season. The bubble just isn’t that great this year.

Ohio State hoops: What We Learned about Buckeyes in Big Ten tourney
NCAA Tournament: Ohio State is dancing again with No. 11 seed
Advertisement