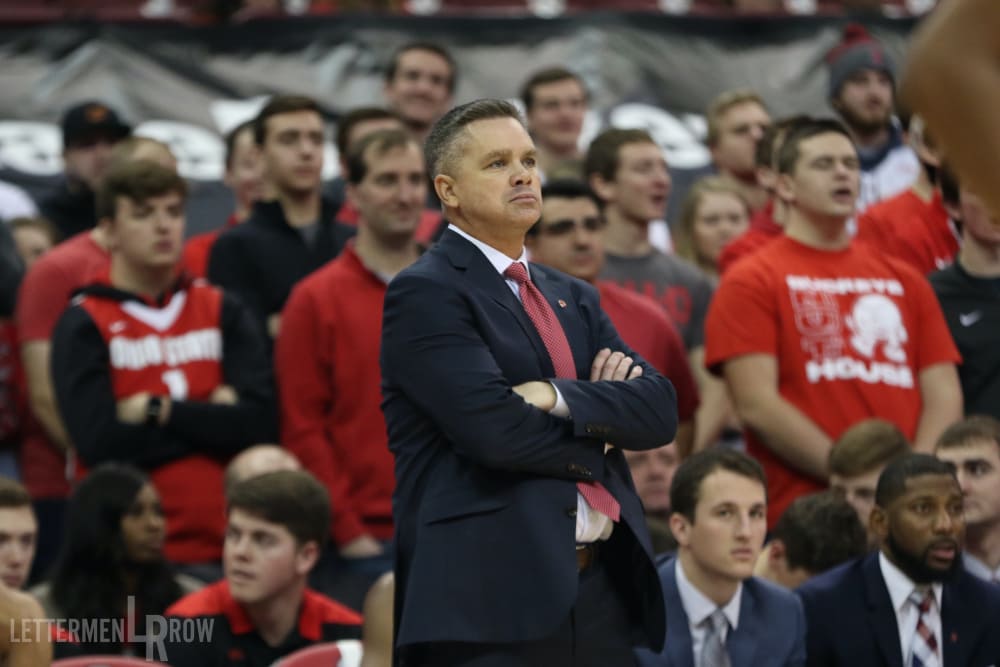 Chris Holtmann's team has work to do with its NCAA Tournament resume. (Birm/Lettermen Row)

For Ohio State basketball, all is not lost. But any margin of error the Buckeyes had is now gone after a surprising 63-56 loss to Illinois at home on Thursday.

Because of a successful start to the season, Ohio State’s tournament positioning heading into the Illinois game was probably better than some might have imagined. The Buckeyes endured a one-win January, and the recency of those struggles was hard to shake, but an impressive non-conference performance included road wins against Cincinnati and Creighton and a neutral-site victory against UCLA. Heading into the game against the Illini, the Buckeyes were usually falling into the 8 vs. 9 seed opening-round matchup in bracket projections.

With a 6-6 record in Big Ten play at that point, somewhere along the lines of either three or four wins in the final eight conference games would likely be enough to punch a dance ticket. Instead, the Buckeyes not only lost a winnable game that could have eased that total but also did so against a team that could end up in the “bad loss” column come tournament time. That defeat put Ohio State (16-8 overall, 6-7 Big Ten) squarely on the bubble with little room for mistakes going forward.

After the Illinois game, Ohio State coach Chris Holtmann said he won’t be emphasizing the team’s NCAA Tournament status with his players or coaching staff or thinking about what the Buckeyes need to do to get in.

“We won’t talk about it,” Holtmann said. “We’ll talk about getting better. A lot of teams would like to be in the bubble picture, including the one we played tonight. I think for us right now our focus is not on bubble or anything like that. Our focus is on getting better and improving and growing. That’s our focus as coaches.”

I’m not Chris Holtmann, though, so let’s break it down.

Five of those seven games are against ranked opponents. Let’s start by getting one thing out of the way. Ohio State has to win both games against Northwestern (which has a 3-11 Big Ten record). That’s pretty much non-negotiable at this point unless they’re picking up several ranked wins… and a team that loses to Northwestern doesn’t seem likely to do that.

Assuming the Buckeyes do that, they’ll need to pick off at least one, possibly two of those ranked opponents. It would obviously help if at least one of those was against Michigan State or Purdue, especially since both of those games are on the road. Beating Iowa or Wisconsin would also be helpful for two reasons. First, obviously, the Buckeyes just straight up need to win some games. But they also need to climb the Big Ten standings, and the Hawkeyes and Badgers are both within reach for Ohio State.

Ultimately, it comes down to this: If Ohio State goes 10-10 in Big Ten play, the Buckeyes probably will have done enough to lock down an NCAA Tournament bid. Even 9-11 might get the job done depending on which team the non-Northwestern win came against (and possibly also whether or not the Buckeyes get bounced out of the Big Ten tournament without a win).

Somehow, that seems both easier said than done but also less work left than some might have expected. Both can be true. Ohio State hasn’t been great since the calendar flipped to 2019, but the beginning of the season doesn’t cease to exist on the resume. It’s true that Ohio State is officially out of excusable head-scratching losses. Lose to Northwestern either time and all of this probably becomes moot. But if the Buckeyes can find it in them to grind out some victories against teams that offer the opportunity for valuable wins, an NCAA Tournament bid is well within reach.