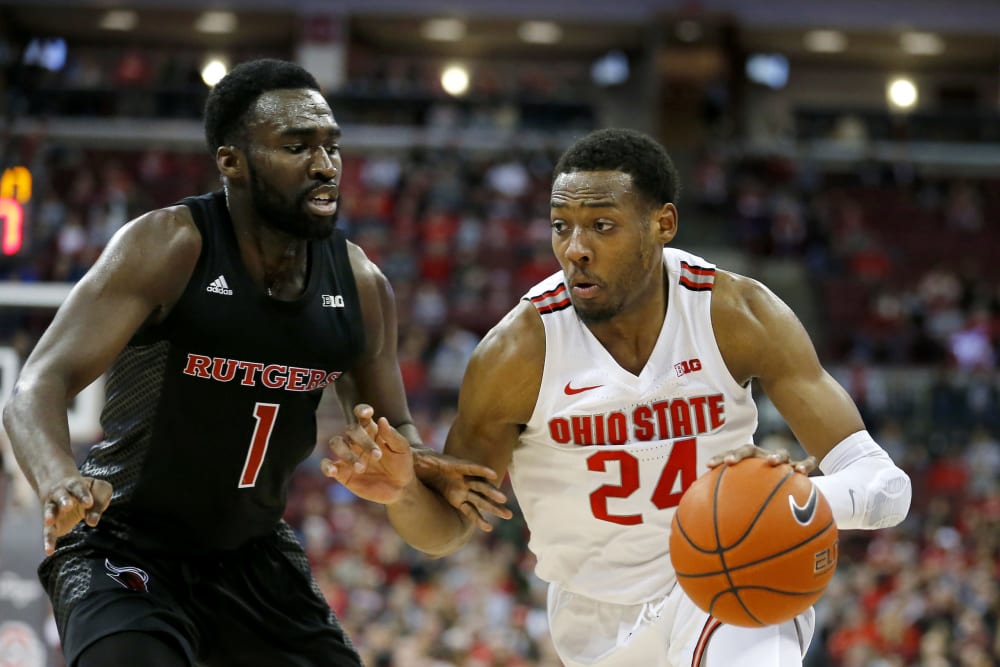 COLUMBUS — It wasn’t as easy as it could have been for Ohio State.

After putting on an offensive outburst in the first half and building a lead that reached 20 at points mid-way through the second half, the Buckeyes let Rutgers crawl back into a game that never should have gotten back to a single-digit lead.

But after a tense final few minutes, questionable passing decisions when Rutgers decided to run a full-court press and plenty of free throws to put the game on ice Wednesday night, Ohio State survived with a 72-66 win inside the Schottenstein Center.

The win over the Scarlet Knights (17-8, 8-6 Big Ten) is a big one for the Buckeyes (16-8, 6-7 Big Ten). After a disappointing loss at Wisconsin, Ohio State found a way to earn a key Big Ten win and improve its standing in the insane conference that nobody can seem to find footing in. There isn’t a true upper and lower class of the league, making every game needed, especially home games.

And for the Buckeyes, they’ll take a win in any fashion it comes.

Lettermen Row is back with Three Points from the much-needed home win for Ohio State.

Ohio State seemed to be in cruise control with a 20-point lead in the middle of the second half, but Rutgers decided the game wasn’t over. The Scarlet Knights put on a full-court press that led to sloppy Ohio State turnovers and missed shots. The Buckeyes allowed themselves to get sped up due to the press, giving Rutgers a chance to come back. And the Scarlet Knights did it. Ohio State had trouble in the back court. It struggled to inbound the ball. It wasn’t pretty. And if the Buckeyes plan on making any noise in the next month, they need to find a way to combat a full-court press, or Rutgers won’t be the last team to give them trouble in late-game situations.

The Buckeyes shot 52 percent from the floor in the first half and hit seven 3-pointers. Three Ohio State players hit two or more 3s in the first half alone. The scoring barrage in the first 20 minutes was kind of offense Chris Holtmann and the Buckeyes needed, especially against a good Rutgers team that has been efficient on the defensive end. Eight different Buckeyes scored in the first half, a stark contrast from the loss against Wisconsin, when they didn’t cross double-digit bench points until late in the second half. Everything seemed to click early on for the Buckeyes. And that gave them a 15-point cushion at halftime to work with for the remainder of the game. They needed it when Rutgers made its comeback attempt, and they were able to hold the Scarlet Knights off on the back of the big first half.

Holtmann might not want the Buckeyes shooting more than 25 3-pointers in a game, but they were hitting them, so it’ll be hard to gripe. And with good 3-point shooting came good offensive spacing. Big man Kaleb Wesson continued to play well from every spot on the floor, but the more he shoots well from the perimeter, the better the Buckeyes will be in their offensive sets. Wesson’s outside presence allowed guards Duane Washington and Luther Muhammad to get into lanes and find scoring opportunities. It gave open shots to Justin Ahrens, who has become a reliable offensive option for the Buckeyes. If Wesson continues to knock down shots from the outside, Holtmann’s offense can keep running at an impressive clip on its way into the Big Ten Tournament.

We need to go towards the inbounder and not laterally or away from.