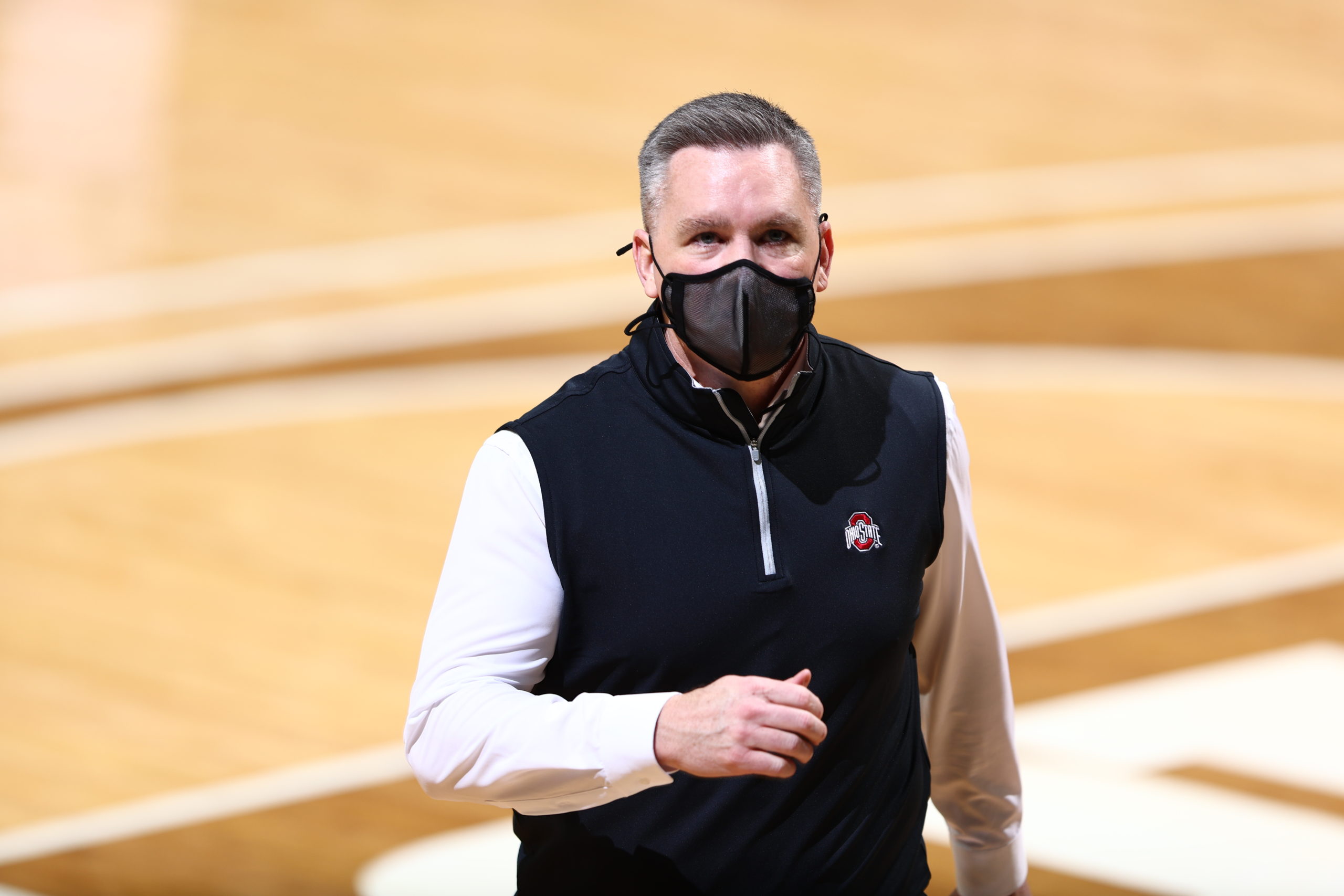 Chris Holtmann and the Buckeyes will need to win physical games down the stretch. (Rey Del Rio/Getty Images)

Ohio State coach Chris Holtmann removed his glasses and repeatedly rubbed his eyebrows, as if to remedy a headache.

Minutes before taking his seat for a Zoom call with the media on Thursday night, Holtmann had been ejected from the Buckeyes 71-67 loss to Michigan State inside the Breslin Center for arguing with officials and earning two technical fouls.

That’s not like Holtmann. But he was as frustrated as he’s going to get on the sideline. Missed foul calls in the paint. A shot clock violation that wiped away a 3-pointer from Duane Washington in the first half that would have changed the later stages of the game. The game featured 42 total fouls and 48 free throws.

Holtmann was certainly upset and angry — and for good reason. It wasn’t just for the officiating. His team, upset by a Michigan State team it beat earlier this season, has now dropped two straight games after riding a seven-game winning streak. The No. 4 team in the country now must find a way to regroup in the next two days before the next challenge in America’s toughest basketball conference — a matchup at home with No. 9 Iowa.

“It’s the Big Ten,” Holtmann said. “They keep coming at you, and we’ll figure out how to get better. Coach better, play better. We knew we were playing a good team. This team was top-five in the country at one point. They’ve got talented kids, talented players. Tom [Izzo] is terrific. We knew what we were getting into here. With Kyle [Young], without Kyle, we knew what the challenge was.”

The challenge was heightened without Young, a physical inside presence who was seemingly cut out for games such as the one Thursday night. But he was held out due to a concussion, and his absence was apparent during the slugfest disguised as a basketball game, one that resembled what life may be like in the Big Ten and NCAA Tournaments.

Ohio State was ahead for most of game, and it appeared to be pulling away by taking a nine-point lead with 13 minutes to play. But the game grew even more physical from there. And the Buckeyes would’ve loved to have Kyle Young on the floor. But he wasn’t available, and he may not be available Sunday against No. 9 Iowa.

The Buckeyes will need to find a way to replace the physical nature of what Young brings to the floor. 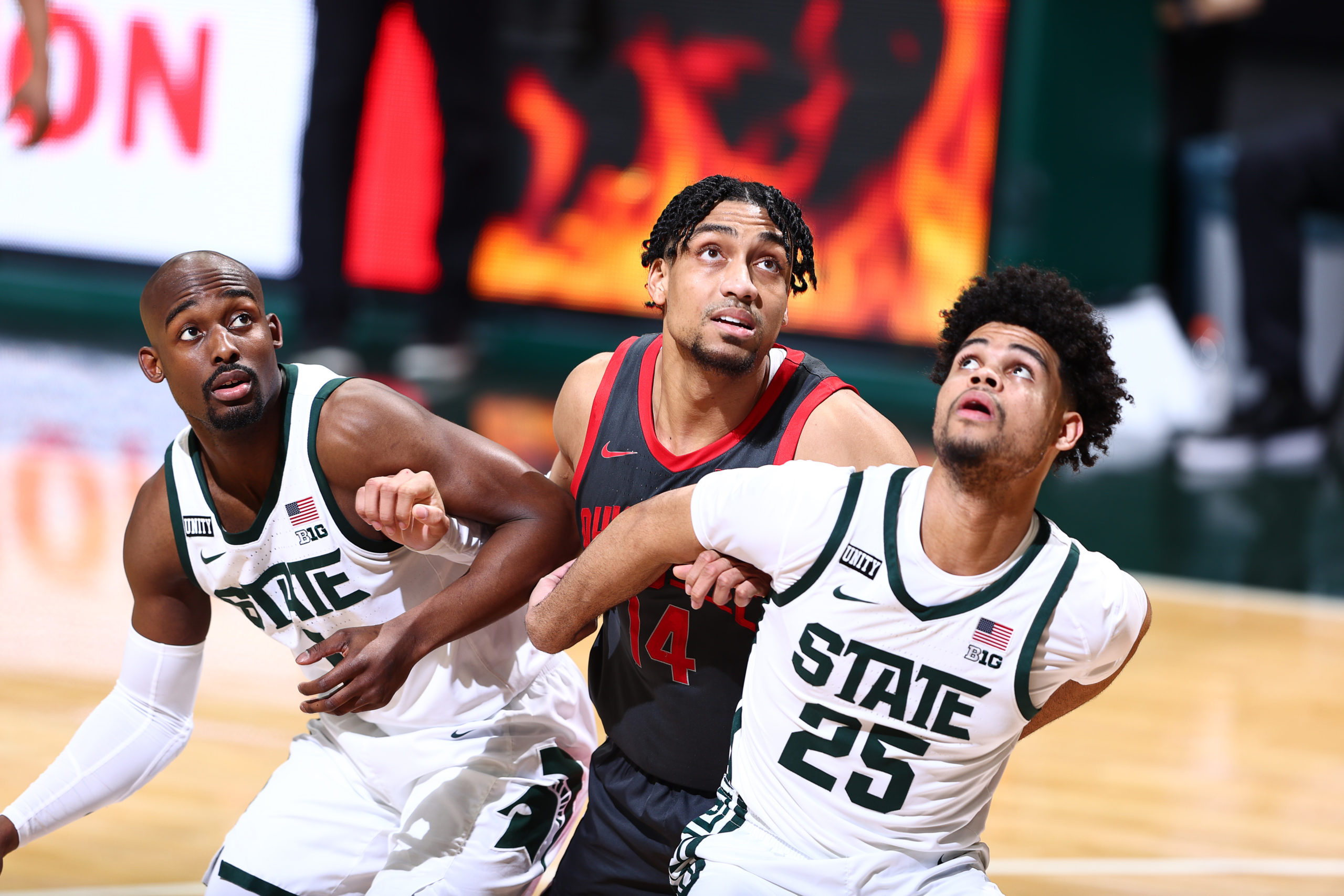 “We’re just going to go back to the hotel tonight, watch film, talk about the game and what we need to get better at,” Ohio State senior guard C.J. Walker said. “We just have to learn from our mistakes and know that, going into March, we’ve got two really good games coming up. We just have to get better right now, refocus, be better defensively. That’s a big thing for us right now.”

There were flashes of improvement defensively. Ohio State forced 15 turnovers. But the good came with the bad; the Buckeyes were out-rebounded and were not the more physical team.

“I thought they were more physical, played with more force than we did and made a few more plays than we did down the stretch,” Holtmann said. “Give them credit.”

Holtmann made sure to give Hall of Fame coach Tom Izzo credit — before leaving the floor with one second remaining due to his ejection. The coach who rarely receives a technical certainly earned both of his Thursday night. But he was fighting for his players during a physical game, one that officiating certainly played a role in.

Ohio State has two tough regular season games left before entering postseason play. Both of them will be physical and there’s no guarantee Kyle Young will be back for the next one. The Big Ten Tournament will be another dose of that — compounded into one weekend. And the NCAA Tournament will, too. Maybe the officiating will be improved, maybe it won’t for those games.

The Buckeyes can’t spend time wondering ‘what if’ about the Michigan State game. It’s on to Iowa, then to Illinois before postseason play.

But Thursday night while starring into a screen and fielding questions, Holtmann had to hold back his emotions following a tough loss. Now, he must look past them.