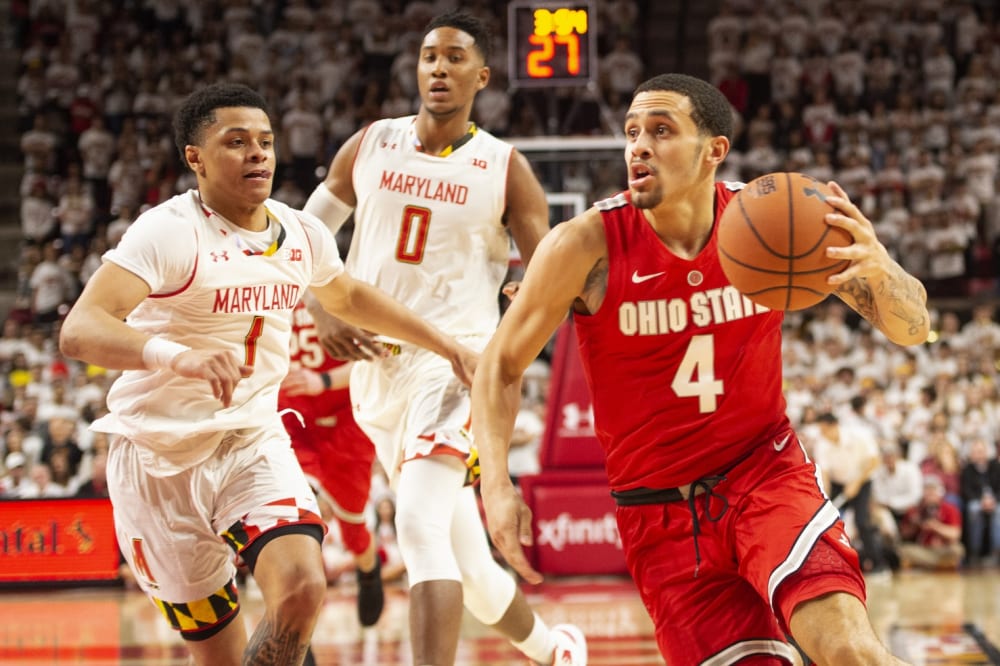 A week after looking at Ohio State’s NCAA Tournament path, the Buckeyes are in about the same position but with three fewer games to work with.

As is fitting with this team, there was some good news and bad news. The good news is that the Buckeyes managed to beat Northwestern, avoiding a crippling loss that would have sunk their postseason hopes. The bad news is that they lost to No. 11 Michigan State and at No. 24 Maryland, depriving them of the type of victory that would make them feel a lot better about their selection odds.

The Buckeyes now have four games left to improve their resume, or else they’ll have to head to the Big Ten Tournament with their postseason fate on the line. At this point, there are probably a fair amount of Ohio State fans asking either one or both of the following two questions:

1. How is a team that’s seemingly so out of sorts still relatively favorable NCAA Tournament position?
2. Why is there any reason to think that the recent futility will end?

Let’s start with the first one. First of all, it’s not a great year in terms of quality on the bubble. (Though I feel like we say that a lot these days. It turns out 68 is a lot of teams.) But more importantly, how a team is “trending” is not nearly as important as some people imagine it to be. Did you beat good teams at some point in the season? Yes? Then you’re set. ESPN hit on this point really well in the Ohio State segment of its Bubble Watch post.

The Buckeyes haven’t won a game against an at-large-caliber opponent in close to three months. The committee doesn’t care when you beat teams, of course, so the November win at Cincinnati in particular is still doing good work on OSU’s profile. Throw in the fact that the team sheet is more impressed with road wins at Creighton, Nebraska and Indiana (all Quad 1 victories) than the layperson might be, and Chris Holtmann’s team is still showing up in brackets as a No. 9 seed.

Ding ding ding. So that’s question one covered. Let’s move on to the second one, which is the million-dollar question. Can the Buckeyes somehow scratch and claw their offensively-challenged program to one more top-25 win over the final couple weeks?

The recipe is simple. Avoid losing to Northwestern, and find a way to beat one of the three ranked teams that the Buckeyes will face in the closing stretch. That should be enough to get the job done, barring some sort of disaster loss in the conference tournament opener. Knowing what you need to do and actually getting it done are two different things, however.

On Feb. 20, Ohio State coach Chris Holtmann spoke again about his approach for dealing with life on the NCAA Tournament bubble.

“We’ve talked about [the NCAA Tournament] in the past a time or two, but I’m not quite sure what the benefit of talking about it is,” he said. “What are you gaining from that? Our focus needs to be on getting better … and trying to limit our turnovers and trying to do basketball things that this team needs to do to improve. We’re trying to keep our guys in a positive mindset and positive frame of mind. They know there’s a lot of season left to be played, but our only focus needs to be can we be better today for what’s coming.”

If Ohio State fans are looking for hope during the program’s recent string of losses against good teams, it’s worth noting that the Buckeyes have the trait that benefits underdogs: They don’t waste games. It’s not been smooth sailing for Ohio State at pretty much any point in 2019, and yet the Buckeyes have plugged along and treaded enough water to keep themselves in the NCAA Tournament picture. Contrast that with Indiana, which also started hot but has lost 11 of its last 13 games. The Hoosiers have flat-out quit, while Ohio State has never mailed it in during a tough stretch.

Is consistent effort always good enough? No, of course not. It’s frequently not. But the fact that Holtmann so consistently gets good effort out of an underwhelming roster means that the Buckeyes will still give themselves chances to steal one against Iowa, Purdue and Wisconsin. Easier said than done, for sure, but Ohio State will have its chances to get the big win it sorely needs.