Connect with us
Ohio State freshman Justin Ahrens is developing into a key contributor for the Buckeyes. (Tommy Gilligan/USA TODAY Sports)

COLUMBUS — Maybe it really was the energy Justin Ahrens was showing on the Ohio State bench.

It probably also had plenty to do with the need for a shooter, the time running out on a season with an inconsistent offense and a limited roster and mounting injuries for the Buckeyes.

Either way, Ohio State found itself turning to Ahrens for a starting role, key minutes and a lot more production than it was surely anticipating from the freshman at this key stage of the schedule. And for the most part, the sweet-shooting lefty has delivered — most notably in a 29-point explosion that might go down as the most significant win of the year for the Buckeyes and seemed at the time to be an NCAA Tournament-clinching victory.

“It could be something like that [energy],” Ahrens joked. “I don’t know, I kind of act a fool on the bench when I’m out there. You know, I like bringing energy out to the floor, and I think that’s something special about our group. Everybody out there was going crazy, and that’s something you really want in a team. It makes it that much more fun. 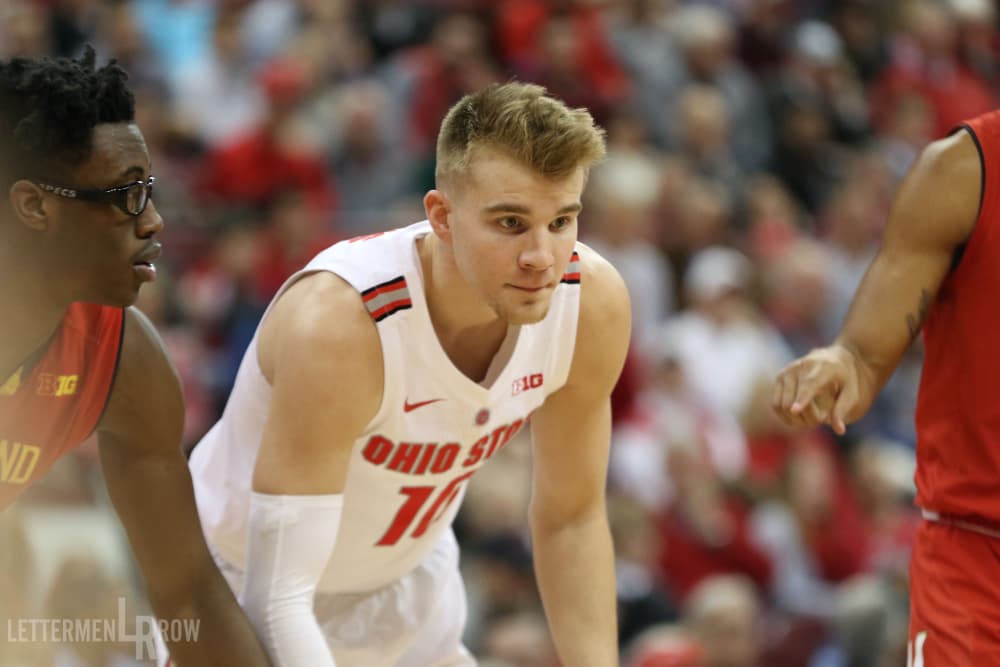 The Buckeyes suddenly find themselves slipping back into the bubble picture after Ahrens had seemingly removed any reason for concern by slicing up Iowa, putting another impressive win on the resumé and setting the table for a second bid under coach Chris Holtmann.

But the suspension of center Kaleb Wesson and disastrous two-game skid without him in the lineup has changed a bit of the math — and it’s also putting more pressure on an inexperienced option like Ahrens to carry the scoring load.

So far, that’s been an inconsistent proposition, which should come as no surprise. But Justin Ahrens is looking like a fixture in the rotation for years to come for the Buckeyes, and former Ohio State standout Terence Dials was in the Lettermen Row film lab looking at the value the sharpshooter provides heading into the final game of the regular season.