Connect with us
What can Alonzo Gaffney bring to Ohio State? (Birm/Lettermen Row)

COLUMBUS — There was no obvious replacement for everything Ohio State was losing waiting directly in the wings.

But there might be one on the way as the Buckeyes build for the future with high-level recruits like Alonzo Gaffney preparing for their chance to follow in the footsteps of a Big Ten Player of the Year.

Comparisons to Keita Bates-Diop are almost certainly unfair at this point before Gaffney has even arrived on campus. But some similarities in his game are already clear to see as he’s developed into a four-star recruit, and particularly on the offensive end, that’s been something the Buckeyes have sorely missed throughout this season. Granted, Ohio State has managed to put itself in position for an NCAA Tournament bid without Bates-Diop, but taking the next step into a contender will eventually require somebody who can provide that kind of consistent, high-end production.

As the 6-foot-9 forward continues to improve his game and add bulk to his 190-pound frame, Gaffney is as good of a candidate as anybody down the road.

“We are very excited about Alonzo,” Ohio State coach Chris Holtmann said when Gaffney signed. “He is someone we targeted as soon as we were hired. He has come from great programs in Ohio as well as his current program, Brewster Academy. He was the first player to commit to us for the 2019 class last spring. 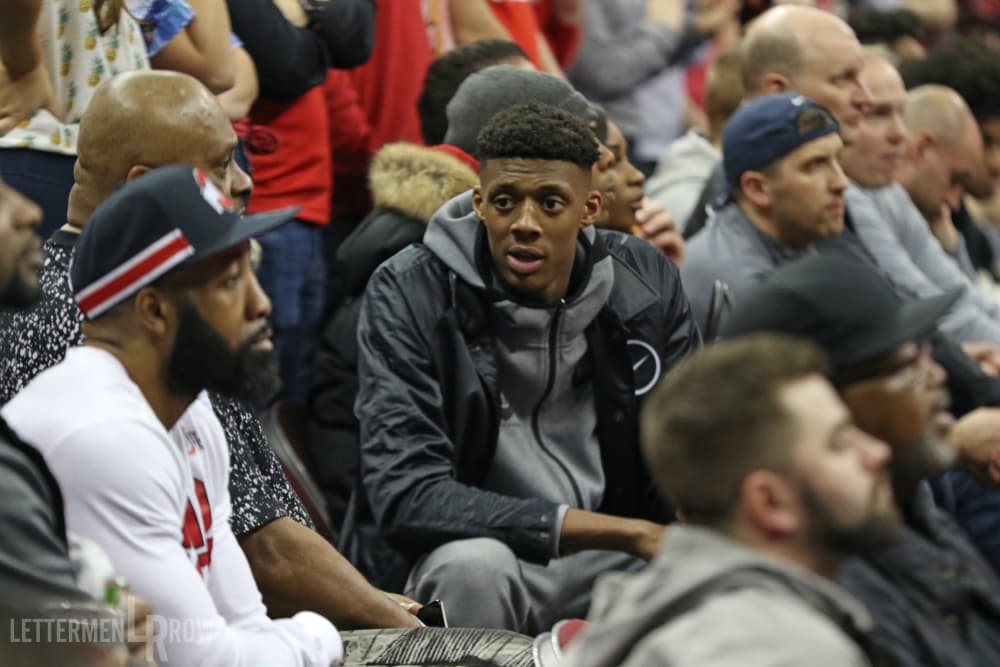 Ohio State signee Alonzo Gaffney took in a game for the Buckeyes this season. (Birm/Lettermen Row)

“Alonzo has athleticism, skill and tremendous measurables. He has a very bright future. We look forward to developing him and we know Buckeye Nation will enjoy watching him play next fall.”

In the meantime, the Buckeyes are holding their own in the Big Ten without that decorated recruiting class, turning a transition year for the program into one that should still end in the NCAA Tournament. That would unquestionably go down as a major success for Holtmann, particularly since his roster should only be more formidable moving forward.

How big of a role can Gaffney play for it next season? How high is the upside for the dynamic athlete? Former Ohio State big man Terence Dials was in the Lettermen Row film lab for a BuckIQ episode focusing on Alonzo Gaffney and what the touted signee might provide down the road.

Continue Reading
You may also like...
Related Topics:Featured, Alonzo Gaffney