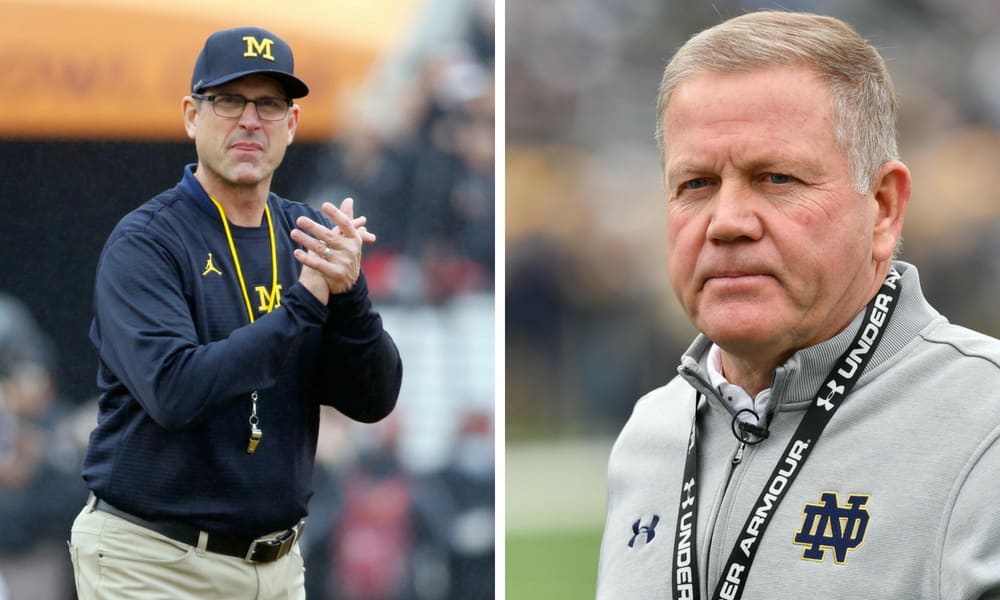 When Letterman Row reached out to gauge my interest in writing a weekly column where I would pick some of the top college football games of the week against the spread, I had one simple question.

Are you sure you want to do that?

“Just make it fun,” was the response I got.

Fair enough. Suit yourself, folks. You asked for this.

Fun is about all you’re going to get from me in this space because the picks probably won’t be very good. Unless, of course, the picks are good. In that case, I want you to share any winnings you may have earned with me. I’m @Tim-Shoemaker-1 on Venmo.

What we’re going to do here is pretty simple. Each week I’m going to select what I feel are the best five games in college football and pick them with the betting line involved. We’re also going to include Ohio State’s matchup each week to give us six selections each and every Friday morning.

It’s going to be fun, educational — and you may even make a few bucks. Or you could lose everything. The choice is truly yours. I can assure you I’m going to brag about every game I pick correctly and casually forget about the ones that went horribly wrong.

With that said, let’s dive right in, shall we? Week 1 has an absolutely loaded slate and it’s the strongest lineup of opening weekend games that I can remember.

All betting lines from Bovada as of Thursday evening

The Pick: For my money, this is the best game of opening weekend. Two preseason top-10 teams who have a lot of College Football Playoff hype. It doesn’t get much better than that.

This is likely to be a pro-Auburn crowd due to the proximity, and that’s probably a big reason why the Tigers are favored — albeit only by two points. For me, it’s pretty much the same story with Auburn as every year: They’re either going to be very good or lose four-plus games. I tend to side with the “lose four-plus games” side of things.

On the other hand, I’m pretty high on Washington and think they are the class of the Pac-12 this season. I like the idea of Chris Petersen having a whole hell of a lot of time to prepare for this game, and that’s why I’m taking the Huskies plus the points.

The Pick: Michigan opened as a 1.5-point favorite and now it’s down to a good, old-fashioned pick ‘em. That’s probably a pretty fair line, as this game feels very much like a toss-up.

This is the kind of game Michigan has struggled a bit to win under Jim Harbaugh, but I think this could be the most talented team Harbaugh has had since he arrived in Ann Arbor (although that 2016 squad was pretty loaded, too). I like their odds in Week 1 even though it’s on the road. I’m taking the Wolverines.

Louisville vs. No. 1 Alabama

The Pick: Lamar Jackson is gone and Alabama is loaded (what a shock!). I’m rolling with the Tide despite the three-plus touchdowns they are giving up.

The Pick: I’m intrigued by this game, and I absolutely love that it has Sunday night all to itself.

I was pretty skeptical of Miami last year, and I think the end of last season really showed they overachieved a bit. I’m not sure the Hurricanes are the eighth-best team in the country this season. However, I’m not sure of anything at this point, to be honest.

I’m probably higher than most on LSU this year. Disclaimer: “Most” in this scenario also includes LSU fans, who usually hate their own team more than everyone else does.

I think former Ohio State quarterback Joe Burrow will give LSU an offensive boost in this game and all season, and I’m taking the Tigers plus the points in this one.

The Pick: I’ll be honest, I don’t know a whole lot about Virginia Tech this year. So, I’ll lay the points and take the home team. Solid advice, baby!

Oregon State at No. 5 Ohio State

The Pick: The spread here is nearly 40 points and it somehow still feels low. Oregon State is awful and Ohio State is, well, not.

There’s been a lot of talk about Ohio State over the last month and a half and essentially none of it relates to football. I’m guessing the Buckeyes are going to try and hang 70 on the lowly Beavers, so I’ll gladly lay the points here.